Our hosts (Philip P. Arnold & Sandy Bigtree) speak with Davíd Carrasco, the Neil L. Rudenstine Professor of the Study of Latin America, with a joint appointment with the Department of Anthropology in the Faculty of Arts and Sciences at Harvard University and Harvard Divinity School.

We begin this episode with a land acknowledgement. Our hosts Prof. Philip P. Arnold and Sandy Bigtree (Mohawk Nation) begin by introducing our guest, Professor David Carrasco. He is the Neil L. Rudenstine Professor of the Study of Latin America, with a joint appointment with the Department of Anthropology in the Faculty of Arts and Sciences at Harvard Divinity School and director of: Moses Mesoamerican Archive and Research Project (MMARP). His work highlights the history of religions and colonialism, conquest, and colonization.

To begin the conversation Prof. Carrasco uses two establishing images first of the “Aztec Calendar Stone” and the Zócalo 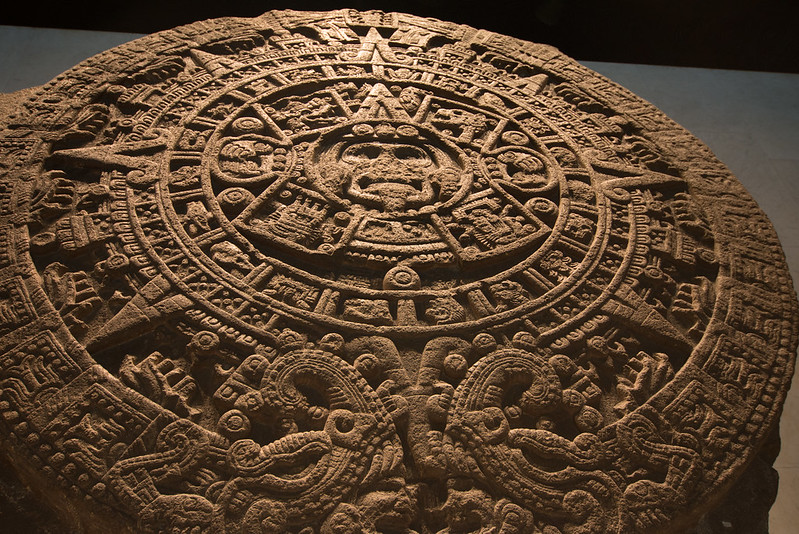 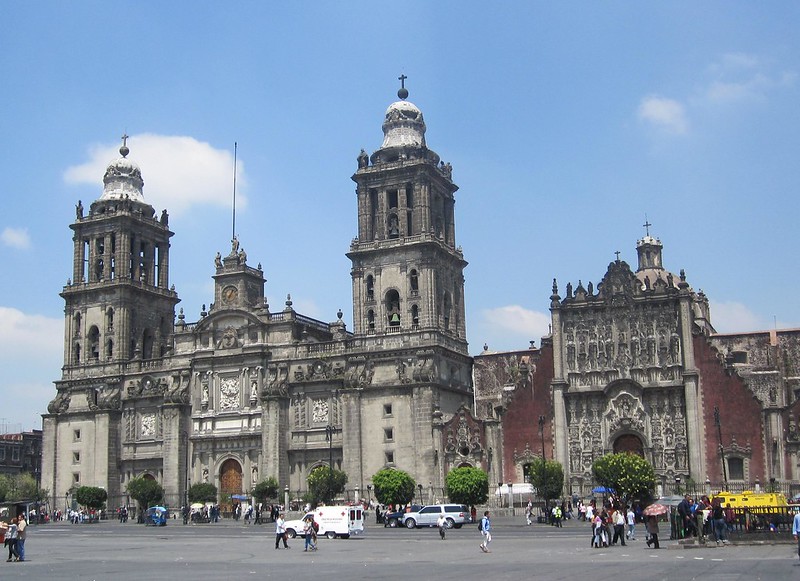 These images juxtapose the Aztec and Conquistador world views and the collision of these world views. Looking at the Zócalo one begins to see it as a space of conquest. The Catholic cathedral, the governmental palace, and the Supreme court are built upon Aztec sacred sites. The Zócalo represents not only the defacement of the Aztec world but also the hiddenness of the Aztec presence and it reveals just how deeply the Aztecs are embedded within the settler colonial present of Mexico. Sandy Bigtree talks about the shock of visiting this space.

What struck me about one of our early visits down there with you was the Zócalo and the cathedral, and that the actual stones had been taken from the rubble of the Aztec temples to rebuild this cathedral and I just had never seen anything so violent and it was just horrifying to me. And then you proceeded to take us to different villages. And I remember seeing we’d go and visit these churches, scattered all over Mexico. And this same thing had happened all over Mexico where the pyramids in sacred spaces were leveled. And then out of the rubble, the colonists built these churches. So they held down to the sacred space, but reoriented it to Christianity. And then they hired artisans to go inside and paint murals on the walls. And they would have angels in the ceiling they could look up to and you pointed out, I’ll never forget it, look at their feet because these angels had sandals on their feet and they were meant to be walking on the earth. I will never forget that moment. And all these doors just kept opening the farther and we toured Mexico with you.

What one can see in Bigtree’s account is the tremendous amount of colonialist Christian aggression that was put into the buildings, the treatment of people, theological and legal systems of conquest. The colonizers sought to extract one meaning from the land and re-embed the landscape with new meaning. Building off of Bigtree’s and his own personal experience Carrasco highlights two important lessons: “Number one, what I would call the defacement of the Indigenous world, but also the way in which in certain communities where either there are many Indigenous people or the Indigenous people that are there able to fight back and survive, they somehow get embedded sometimes in hidden ways, in the very architecture, ideas, laws, and styles of life.” He continues, “what I see in the legal history of this [colonization] is a defacement of the worldview of these people. You deface the worldview, you deface the earth, and then you deface the people.” When we talk about the Doctrine of Christian Discovery we are talking about a cosmovision and one wholly at odds with the Indigenous world.

After discussing how the Zócalo provides a snapshot of colonization, Arnold shifts the conversation to the History of Religions as a theory and method for understanding the Doctrine of Christian Discovery. Arnold asks how can Mircea Eliade and Charles H. Long help to make sense of the doctrine? For Carrasco, Eliade anticipated, the current moment of a cultural awakening to what Black, Indigenous, and other Persons of Color have been doing and how they have been reshaping history (C.f. Mircea Eliade, “New Humanisms”). Building on the discussion of Eliade’s work both Arnold and Carrasco highlight how the History of Religions attunes scholars to the presence of human diversity and interrelated relationship with the landscape. Two important concepts they draw from Eliade’s work is presence and habitation. Both of which highlight how spaces and stories shape perception of the world. Charles H. Long’s work expands upon the work of Eliade by bringing students stories into the classroom and taking their background and perspective seriously. In Significations, Long underscores how colonialism is always justified not only through law but also through religion and religious frameworks. Building on Long’s work Arnold has developed a theology of conquest. For Arnold and Long part of what is happening in the act of colonization is that the colonizer is attempting to enact a second creation of the world. In light of the physical and epistemological violence of the colonial project, Indigenous peoples had to find new resources to make a better world out of the tragedy and violence of colonialism to move into a new world beyond after colonialism.

For Long part of the task is not only identifying the why and how of colonial violence in the past but also by finding new religious resources to create a better world for today. Finding and recovering resources to reject colonialism is part of what inspires Carrasco in his research and teaching. Both Carrasco and Arnold are grateful to their teacher Long for helping to illustrate how the tragedy of colonization does not have to be the end of the story, there is always the resistance to colonization to make or create a better world. Using the work of Long, Arnold asks listeners to imagine what it was like for Indigenous peoples to see and hear the Requerimiento being read aloud by Cortez and his men. Following up on this point Carrasco highlights how to understand the fore of Requerimiento once again turns the conversation to language and epistemology. It is a statement of authority and hierarchy and it represents what the Spanish saw as the universal theology and law of their world. It is a statement of their cosmovision. Further illustrating how the Requerimiento and the Doctrine of Christian Discovery. Colonialism insert itself into the story and requires starting with and engaging with this experience. It attempts to reshape the world.

Shifting the conversation back to the moment of colonization, Carrasco turns to Bernal Díaz del Castillo’s The True History of the Conquest of New Spain. Castillo’s memoir sought to justify Spanish superiority and violence.

I, BERNAL DIAZ DEL CASTILLO, citizen and governor of the most loyal city of Santiago de Guatemala, one of the first discoverers and conquerors of New Spain and its provinces, and of the Cape of Honduras and Higueras, native of the most noble and famous city of Medina del Campo, and son of its former governor Francisco Diaz del Castillo, known as the Courteous - and his legal wife Maria Diez Rejon - may their souls rest in glory I - tell you the story of myself and my comrades: all true conquerors, who served His Majesty in the discovery, conquest, pacification, and settlement of the provinces of New Spain: one of the finest regions of the New World yet discovered, this expedition being undertaken by our own efforts, and without His Majesty’s knowledge.

For Carrasco this quote highlights several elements of the Doctrine of Christian Discovery. Notice the four keywords used by Castillo, “discovery, conquest, pacification, and settlement.”  Castillo is laying out his thesis and establishing that he believes that the Spanish “discovered” which for him meanings defining not only the Indigenous peoples but also the landscape. Carrasco puts it clearly, for Castillo it is as if the Indigenous peoples “didn’t even know each other until we [the colonizers] got there.” Of course, this is patently false but again this is how Castillo is imagining the world. Next is the conquest or conquering of the area, Castillo views the war between the Spanish and the Indigenous peoples is now completed and Spain is the victor. The third word is pacifying which again goes to Castillo’s view that the Indigenous peoples have been conquered and they are now passive and no longer active agents of their own story. Here is where the Requirement comes into play, it is meant as an attempt to remove agency. Finally, there settlement which is the taking of lands and the establishment plantations and setting about the tasks of exploitation, extraction, and enslavement. For Carrasco, “this is really what this colonialism is all about. It’s not about freedom. It’s not about creating a new world where people can flourish. It’s not about the land of the brave. It’s about discovering conquering, pacifying, and settling.”  Castillo’s True History illuminates the cosmovision and true religion of the colonizers, “Religion could also be part of this type of sophisticated legalized aggression.”

Arnold excitedly picks up on this point and says that scholars of religion and the humanities/social sciences have to confront the “this fundamental question of colonialist destruction,… that is an impediment to our understanding [of] others.” In order to highlight this point Arnold places the work of Fray Bernardino de Sahagún in conversation with Bernal Díaz del Castillo’s work. Sahagún was a Franciscan priest and missionizer/evangelist and a colonizer who learned Indigenous languages and began to try and live and work with the Indigenous peoples. The longer he learned the languages and lived with the people he began to change. For Arnold and Carrasco this is a critical point, colonization changes everyone. The colonizers like to imagine themselves as unchanged and changing. However, they are changing, many are becoming more violent and militant, and yet some like Sahagún become more hope, while also still being a problem.

Turning to the contemporary period Arnold asks Carrasco where do you see the Doctrine of Christian Discovery today? He suggests that its legacy lives on in exploitation, extraction, and intolerance. Carrasco suggests understanding colonization today that one needs to read the works of Toni Morrison. He finds her essay “The Foreigner’s Home” in The Source of Self Regard to be especially illuminating. Here Morrison discusses how colonialism transforms Indigenous peoples into foreigners. For example, in 2019 a gunman murdered 23 Mexican and Mexican American’s at a Walmart in Texas. He claimed they were “invading” Texas. However, these people were all locals, and many were natives to this land. They were natives to El Paso. Those who died had Indigenous, Spanish, Mexican, and European ancestry with family who have been living there for centuries. Those local and Indigenous to a land have now become strangers in their own home because the colonizer wants their home. Yet in defiance of this gunman the residents of El Paso seek peace and construct a peace guardian. Peacemaking is an active and difficult process one which requires confronting histories of harm and violence. It means challenging the white supremacist and colonizing notion that one should never say sorry or apologize for anything. Peacemaking is about listening, learning, apologizing and working together to heal from trauma. Bigtree reminds listeners that peace and peacemaking are disruptive and require healing and transformation. She finds inspiration the words of Tadodaho Sid Hill who says that peace can only be obtained when you are in proper relationship to the natural world and all living beings, where one is living in peace.

This podcast is licensed under the Creative Commons by the Indigenous Values Initiative.
This site was created with Stackbit and is maintained by Adam DJ Brett.